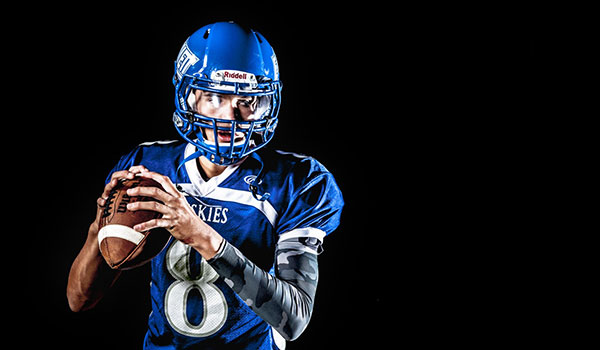 Here’s a question for you: what do you believe to be the most important skill required for a quarterback to succeed? A good quarterback needs a strong throwing arm, quick feet, strong cognitive skills, and leadership qualities —surely everyone could agree on that. But is that enough to truly excel at the sport?

Quarterbacks tend to intensively train their physical strength without realizing that enhancing their visual and cognitive skills could render their exercise drills more effective. Acute peripheral vision and exceptional reaction time, among other visual skills, are critical to quarterback’s success. Sports vision training lays the cornerstone for these skills and helps players be the athletes they know can be. Contact Dr. Sarbjit S. Virk to see how sports vision training can help your child or players improve their game.

Quarterbacks need to be aware of everyone and everything around them and understand the precise location and path of movement of every player. At the same time, they need to follow the ball.

Given this scenario, which visual skills are needed for a quarterback to succeed?

Following a quick-moving object — i.e. the wide receiver  —requires sustained focusing power control and an ability for the eyes to shift quickly and accurately.

By increasing and stabilizing binocular depth perception, quarterbacks can improve their spatial judgment. If the receiver is farther than you assessed, your pass will not reach him. Is he closer than you thought? He may have to stretch, jump, or run for it.

When the quarterback has the ball, all the opponent’s players' eyes are on him. Most dangerous are those who can see the quarterback, but he can't see them because they are at the edge of his visual field. Strong peripheral/side vision prepares quarterbacks to see where the defenders are located at any given time.

This refers to the speed with which the quarterbacks' brain interprets and reacts to the opponent's action. His next step depends on how quickly and efficiently his brain integrates the visual input with motor functions.

The quarterback has processed all the information and reached a decision while he was moving. This requires excellent coordination between the eyes, hands, legs, and the rest of the body. Now it is time to act. With vision and movement perfectly aligned, the ball will reach the player the quarterback chooses at the exact point in space and time he decides.

What you just read was a second in a football game. Even though it wasn’t a particularly complicated situation, the advantages of superb visual skills are evident.

The Vision Skills Needed for Quarterbacks to Succeed from EyeCarePro on Vimeo.

Enhancing the Performance of a Quarterback

You can train visual skills just like you would any other skill. Optometrists, such as Dr. Sarbjit S. Virk, offer sports vision training to help players achieve their goals and take their game to the next level. A functional eye exam will evaluate visual skills, after which Dr. Sarbjit S. Virk will create a personal vision training plan. The child will typically receive in-office therapy once or twice a week, coupled with home exercises.

At Advanced Eyecare Solutions, we help players be the athletes they know they can be. We train players from Bellevue, Seattle, Kirkland, Redmond, and throughout WA.